Why you can’t prime struts and shocks by hand

There are two basic shock designs, mono tube and twin tube. To function correctly twin tube struts and shock absorbers need to be primed, but not necessarily hand-primed.

A twin tube strut and shock absorber design consists of two tubes, an outer reservoir tube and an inner working tube. These tubes are filled with oil and charged with nitrogen gas to assist with low-speed control, high damper speed damping performance and to perform better at higher temperatures. 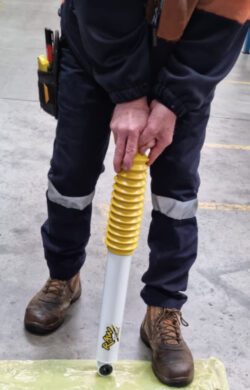 When attempting to hand-prime a shock or strut people try to extend and compress the unit manually. If one shock or strut feels different from another many think that this indicates a faulty unit which is not the case. One unit may feel different from another when hand-primed because during storage and/or shipment, units are laid on their sides causing some of the oil in the working tube to be displaced by the nitrogen gas from the reservoir tube. During initial hand-priming a drop or lag in the damper is observed, also called dead spots. This is the change in damping force generated as the working piston moves through the gas pockets. 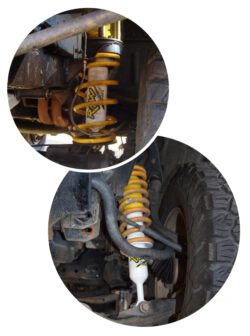 When the unit is fitted to a vehicle the force generated by the suspension will automatically prime the damper by displacing the gas with oil in the working cylinder, these forces cannot be duplicated by hand. The only real way to test a strut or shock absorber is in the lab using a variable stroke dynamometer. This machine can replicate the forces exerted by a vehicle’s suspension, it excites the damper at higher velocities and longer strokes than humanly possible. Dynamometers are equipped with very accurate load cells capturing forces at very high sample rates, measuring the force vs velocity for the unit being tested.

All RAW 4×4 struts and shocks are self-priming, this is achieved by correctly setting the balance between the foot valve and main piston valve.